Sam Bailey is a 36 year old prison guard, at a men's prison, but she has the voice of an angel.  Watch her blow the British 'X-Factor' judges away when she sings Beyonce's 'Listen' during her audition.  She's being called the next Susan Boyle. 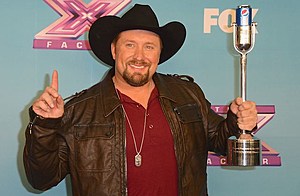 Tate Stevens, 'X Factor' winner and vocalist extraordinaire, has just made an exciting announcement. His self-titled debut album now has a release date, causing all of his fans to holler along with the 'Holler if You're With Me' singer.