Carrie Underwood is a well known animal protection activist so when a chipmunk invaded her home she called on her hockey playing, tough guy husband, Mike Fisher to humanely catch and release. Easier said than done.

OK, so it's not exactly a laceration but I'll bet it smarts. 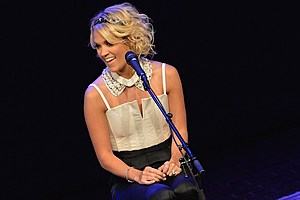 Carrie Underwood Celebrates No. 1 With 'See You Again'

In 2005, Carrie Underwood proved on ' American Idol' that she was born to be a singer, and the six-time Grammy winner continues to remind everyone that she's a star - now with the celebration of her 18th No. 1 single.