The Daily Express looked into some of the reasons behind and effects of the superstition behind Friday the 13th.

--In Christian tradition there were 13 guests at The Last Supper, the 13th being Judas. Tradition also has it that Jesus was crucified on a Friday. Put Friday and 13 together and you have the double whammy of superstitions.
--Friday used to be called hanging day as it was customary to execute criminals on this day. There were 13 steps up to the scaffold, 13 turns in a hangman’s noose and 13 pence and a halfpenny paid to the hangman.
--Insurance company Norwich Union also revealed that they received more accident claims for Friday the 13th than on any other day. Underwriting manager Nigel Bartram said that “one reason could be that people alter their driving behaviour in response to a perceived “unlucky day”.

via Why are we so scared of Friday the 13th? | Weird | News |Daily Express.

I don't consider myself superstitious but just to be sure I will avoid walking under black cats and make certain no ladders cross my path. Or something like that. 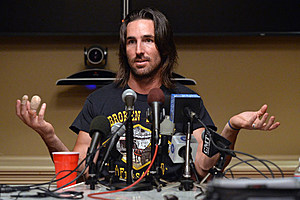 Jake Owen on Freak Accident: 'I'm Just Prone to This'

Jake Owen's hand injury is just the latest in a growing list of his injuries occurring during recreational activity that some may label as extreme. Before his block party celebration to commemorate his fourth straight No. 1 single, Owen said he doesn't plan to reign in his adventuresome ways, no matter who asks him to.