Miranda Lambert is a well known animal activist with a special place in her heart for rescuing abandoned animals. When 6-year old Riley Weinberger learned Miranda was going to appear in concert near the Big Dog Ranch Rescue facility where she volunteers in West Palm Beach, Florida she hatched a plan to get Miranda into the shelter for a visit. Check it out.

The result? According to WPTV, Miranda caught wind of the effort and showed up at the facility, asked Riley for a tour and even ended up with a new puppy which she named "Bellamy" after Florida residents the Bellamy Brothers. And that's not all.

“Miranda was wonderful and very kind,” said Eric Weinberger, Riley’s father. He said that in addition to adopting the puppy, who was rescued from Miami-Dade Animal Shelter, the singer donated money to Big Dog Ranch.

One can only wonder what Blakes' reaction to yet another "family" member was. Then again, he's probably used to it! 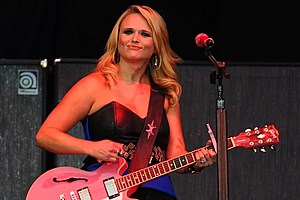 Miranda Lambert 's having another baby - but not in human form. The multi-talented starlet is birthing another Pink Pistol store, this time, in her home area of east Texas. Lambert - who has admitted that her husband Blake Shelton is jealous of her 'big pink baby' - announced via Facebook that she's going to set up shop in Lindale, Texas, where she was born and raised.