Robert Fernandes wasn't very happy with his tax bill. To his his distain Fernandes showed up at tax collectors office with $7143 (and change) in dollar bills and videotaped the proceedings. What was he so upset about?

Fernandes, as reported by Forbes, feels that his money is being "stolen".

Fernandes’ young children (ages 1, 4 and 7) are not enrolled in a brick and mortar school in the school district: Fernandes’ wife is currently homeschooling the children. He said about the tax, “We don’t even use the public system, yet I am being forced to pay all this money into a public school system. I don’t think that’s really either fair or just or even ethical.

According to the article Fernandes recently moved to the township in part because of the lower tax rate than he had been paying so, apparently, he had done some research. Also, the home schooling laws in Pennsylvania do allow for home schoolers to access public school facilities.

Families who homeschool are still considered part of the school district where they live – in some districts, home schooled children are allowed access to the schools for extracurricular programs like art, music and sports.

Check out the video of Robert approaching the tax collectors office with the stacks of dollar bills. The whole story can be found here. 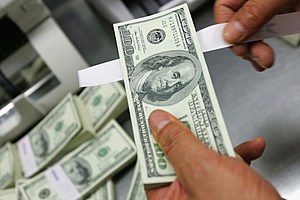 5 Strange Federal Tax Deductions You Might Not Know About

Tax season comes and goes every year, to the dread and relief of many a taxpayer. Even if you've taken care of your taxes this year, that doesn't mean you shouldn't be mindful of potential tax deductions you can claim for your next round with the government in the year to come.

Filed Under: taxes
Categories: This And That, Weird News
Comments
Leave A Comment
Back To Top